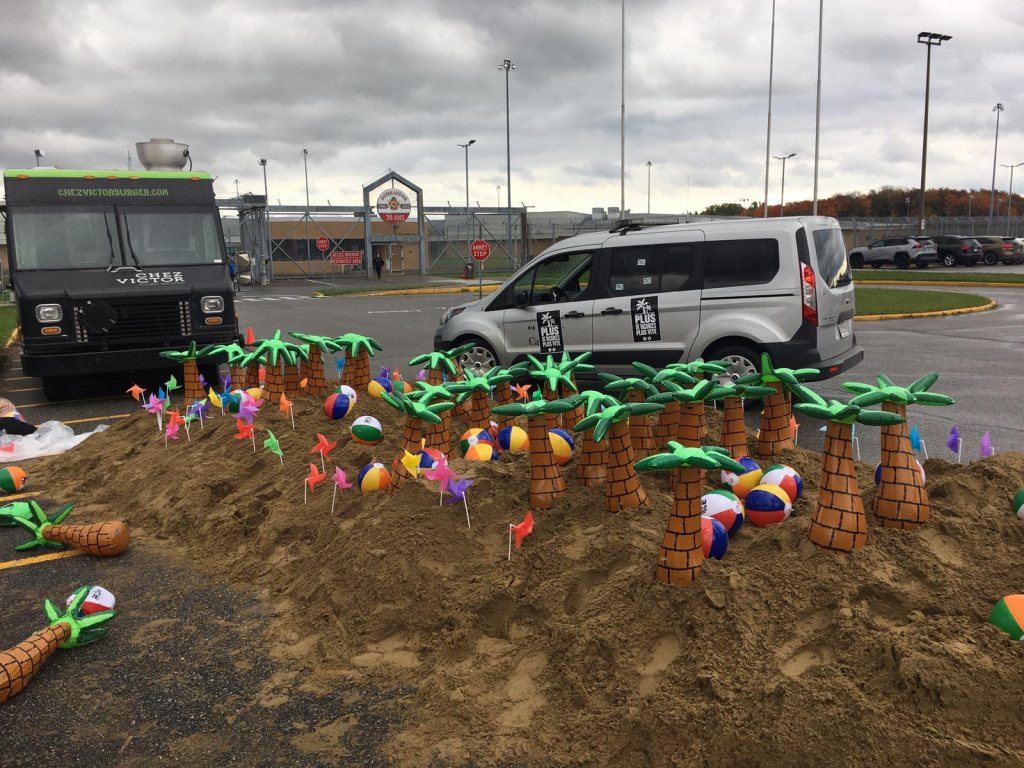 After numerous changes in the employer’s spokespersons, negotiations finally got underway last spring, right in the middle of the pandemic.

Our pressure began with fighting against the employers’ demands on changes to our scheduling rights. After just one flyer and some info lines, as well as very strong language at the negotiation table, the employer simply removed their demand on Appendix K.

On July 20 2020, we distributed water bottles with a sticker pushing our demand for a 3% increase per year. On August 18 we distributed blue tube masks.

Things really starting heating up in the fall: on September 14 we distributed the “More leave sooner” sticker to put on the blue bottles, and then on September 17 we set up an information line about the employer’s demands around Injury on Duty leave, after which the employer dropped the demand.

During the week of September 28 we organized 4 consecutive mobilization days. This action culminated in a wildly successful giant Beach Party to underscore our demand for more leave and our determination to “bring vacation to the workplace” if we didn’t get it. The mobilization helped us make significant gains at the bargaining table. We kept up the pressure during the week of October 5 to 9 with demonstrations in front of the offices of local MPs and Ministers in each region.

Our message was clear: “We sacrificed during the first wave of COVID 19 and we’ll keep sacrificing during the second wave. We want a good agreement!”. After a final information line and surprise visits to Duclos’ and Trudeau’s offices, an agreement in principle with the Treasury Board was reached on October 17. Two weeks later, it was also a done deal with CSC.

The importance of mobilization

During negotiations, there are two ways to get what we want: the bargaining process and pressure tactics to increase our bargaining power. The bargaining process involves each party giving something in exchange for something else. Of course there are lots of things we don’t want to give up (e.g. the scheduling system), but there are also lots of things we want to get (e.g. a leave system over and above what the rest of the public service has). So we also have to bring pressure in the form of mobilization to give us more bargaining power and get movement at the bargaining table. All mobilization actions can be thought of in this way. When we mobilize, we demonstrate our strength and put pressure on the employer.

Whether or not we personally like the action is beside the point, because it is through unity in action and strength in numbers that we achieve results. In this round of negotiations, as in previous ones, every time we mobilized there was a direct impact at the bargaining table. Special thanks to the national executive, all regional and local executives, and all the members of UCCO-SACC-CSN who participated in the mobilization activities.